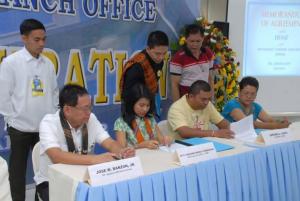 However, Berberabe said they wanted to reach out also to all informal sectors as they wanted them to benefit from the Fund’s program on provident savings and home financing.

Republic Act 9679 requires for universal coverage including those informal groups even as Berberabe said those earning P1,000 up can become Pag-IBIG Fund members.

The City Governments of Mati (Davao Oriental) and Tagum (Davao del Norte) also signed separate memorandum of understanding with the Fund represented by Mati City Mayor Michelle Rabat and Tagum City Vice Mayor Allan Rellon for implementing a scheme where registration and membership with Pag-IBIG Fund is a pre-requisite for renewal of business permits.

“We wanted these job order workers be covered and able of the benefits of Pag-IBIG Fund,” she said.

Romel Matapid, president of MASTODA said for our members not to be burdened by one time payment of the P200 monthly contribution, they designed a scheme to pay it daily at P7.

He said they learned of the membership coverage through flyers and posters and they were interested on the savings benefit of the program kay ang kwarta nga among ihulog naa may interest ug dibidendo (the money that we save will earn interest and dividends).

Speaking of dividends, Berberabe said that Pag-IBIG Fund’s board of trustees chair Vice President Jejomar Binay declared some P8.491 billion worth of dividends, equivalent to 71 percent of the Fund’s net income for 2011 and to be divided among the 102 million members.

She said dividend rate was pegged at 4.13 percent, the highest so far.

Berberabe said they took pride in the fact that Pag-IBIG Fund continued to sustain its financial growth through the years, making it one of the strongest and most stable institutions in the country today. (PNA)
RMA/Prix Digna D. Banzon/ldp

This entry was posted on Monday, May 14th, 2012 at 10:47 pm and is filed under Uncategorized. You can follow any responses to this entry through the RSS 2.0 feed. You can leave a response, or trackback from your own site.